Sankrit, the languge of the Gods.

Mercury rules speech. Those with a well-placed mercury make eloquent speakers and are pundits of the spoken word.

The Vedic culture was born from the spoken word. Sanskrit is called Devavāṇī meaning language of the Gods, and it is believed that the Gods communicate in and understand Sanskrit and revealed this form of communication to the holy men of India (Rishis) who through unwavering meditation, received the divine knowledge of the Vedas. The ancient sages understood the significance in the vibration of sound and its energetic effect on the body and environment.

The oldest written form of Sanskrit is traced back to 1500 BC, but it has been recited verbally for centuries before this. This language was created to be spoken, not written. Sound is the essential aspect of the Sanskrit language, so correct pronunciation is paramount.
Generation after generation learned the ancient teachings through the oral tradition of chanting. The chants are poems comprised of Sutras or verses, composed in meters, they are recited in a specific pattern and are explicitly created to chant.

Sanskrit is the language of Ayurveda, Jyotish, Yoga, Vastu Shastra and is said to be the native tongue of all Indo – European languages including English, French, Spanish, Italian and German.
Sanskrit also forms the bedrock of a majority of languages that are spoken in India today.

The Structure of the Alphabet

The alphabet itself is taught through a chant and has substantial meaning. The healing qualities of each of the 52 letters, when pronounced correctly create a sound wave or vibration on a cellular level, because they connect to the subtle pathways of the body (nadis), the elements, the chakras and marma points.

Vowels are called Svara, which also means sound. When pronouncing most of the vowels no part of the lips or tongue touches the rest of the mouth, creating a settled space.
The first letter of the alphabet is A, which means “the beginning”. The vowels come at the beginning of the alphabet and are considered pure, subtle energy.
The consonants are called Viañjana, which means manifesting. The consonants are considered matter as these have slightly harder sounds, so they come after the vowels. Samkhya philosophy believes that the subtle manifests the gross So, in the Sanskrit language, the vowels manifest the consonants.

A vowel by itself, a consonant or a group of consonants, followed by a vowel is called a syllable. A single syllable is what’s known as the root word. The root sprouts the meaning, which joins the stem, the root and the stem sprouts into a word.

Let’s take the word Sanskrit or sáṃskṛta, which comes from the root sam.

Sam means “the sum of” or “together, perfected, good or well”. The stem is krta– which means made or formed. Therefore, sáṃskṛta or Sanskrit means the sum of that which is perfected.

Some would argue that Sanskrit is indeed a language of perfection as it is entirely phonetic.

Nasa has been studying languages for over 20 years to see which one would be most suited to programming for artificial intelligence. It seems that Sanskrit is the winner due to its logical and well-structured grammar.Sanskrit meets all of the criteria for computer programming. It provides the least amount of words with the most direct meaning. Even if you reorder the word structure or jumble it, the essence remains the same.

Sanskrit is profound on so many levels. Just like nature itself, it holds the remedies for healing and the knowledge of the universe. 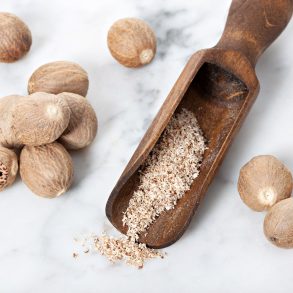 Sedate or Arouse with Nutmeg! (Myristicaceae)